Colorado Springs is a city located at the eastern foot of the Southern Rocky Mountains in Colorado. Military, the High-Tech industry and tourism have traditionally been the major drivers of the economy but the service sector has recently been on a meteoric rise. Colorado Springs has always been viewed as one of the most innovative cities in the United States and it is estimated that in every three days, a new startup company is born in this city. Besides, this same city in which Nicola Tesla carried out his experiments has scored some major firsts such as the development of the first floppy disk and the birth of the Global Positioning Satellite (GPS) technology. In line with this rich history and industrial culture, Colorado Springs is home to several companies which do not just compete with the best in the world but also generously give back to the society. Below is a list of some of them:

Founded in 1967 by Gil Johnson, it has grown into a huge company worth $ 7 billion. Some of its amazing works include The Colorado Springs Fine Arts Center and the U.S Olympic Commitee Headquarters. These works serve as its silent endorsements as seen by the high number of repeat clients( 90% of its completed projects). It has a company funded scholarship for the current employee’s children and supports tens of local, national and global charities. Colorado Springs Business Journal named it among the best places to work in and its CEO scooped the best boss award in the 2013 edition.

Following the 2012 Colorado forest fires, a group of designers, printers and marketers came together and pooled their skills to design, print and market stylish products to raise money for the wildfire relief effort. A whooping $ 300,000 was raised at the height of their campaign in just a week! It continues to support the wildfire relief and all the profits are channeled to charity.  Here is how this company got started.

This company formed in 2012 specialises in designing and developing bicycles with oversized tires that can survive unstable and soft terrains. It donates bicycles to non-profit organisations that distribute relief help and carry out disaster recovery missions in Africa.

This is a beer company formed in 1994 whose products have gained a lot of popularity over the years. It was instrumental in the setting up of the Ivywild School which serves as a multipurpose community space for the people of Colorado Springs.

This is a community work space where entrepreneurs, small businesses and creative people go to get their work done at a daily fee of only $15 and an even cheaper monthly membership programme. With regards tp year events held to motivate these people new ideas are born and the zeal for greater achievement attained. This could be one of the reasons behind the increasing startup companies. 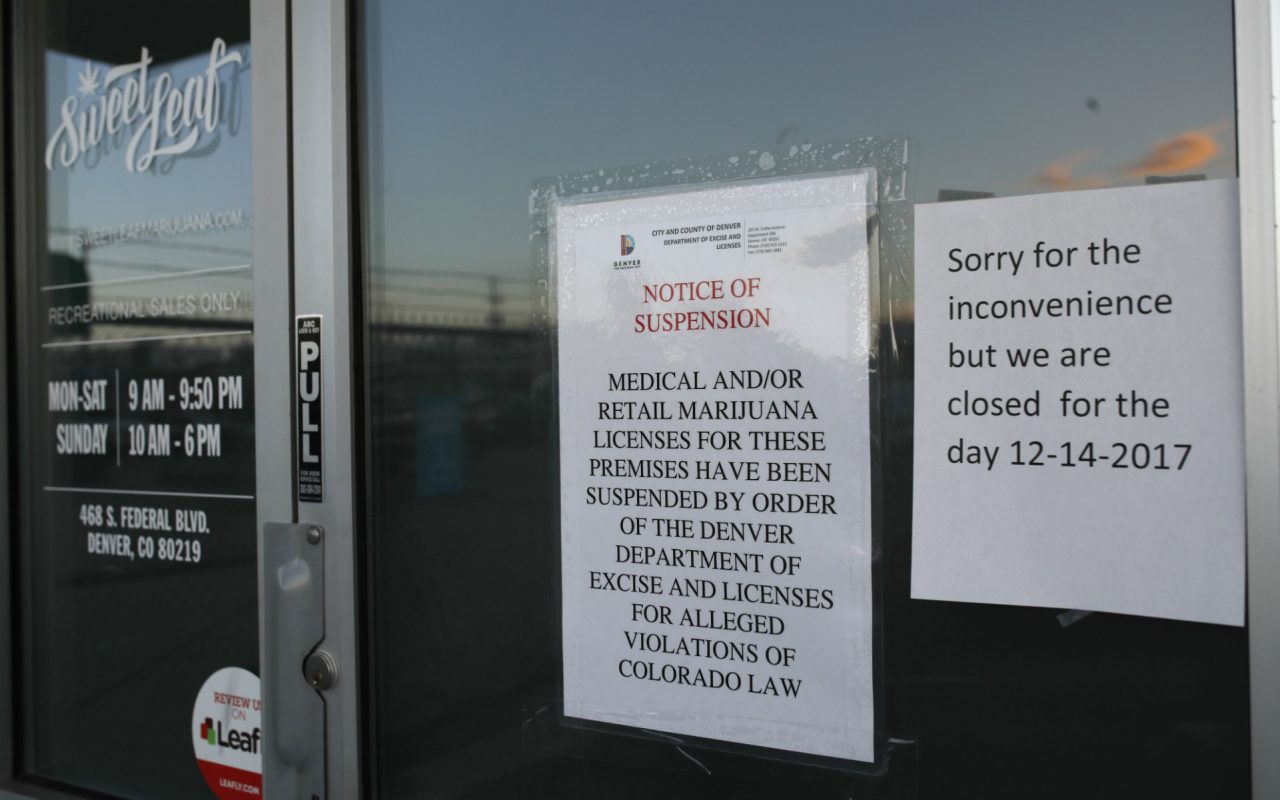 UPDATE, Dec. 15, 2017: Denver Westword’s Thomas Mitchell reports that, as of Friday, authorities had arrested 13 people in connection with the Thursday’s raids on Sweet Leaf dispensaries. Police said they conducted the raids because Sweet Leaf employees were allegedly selling customers more cannabis than allowed under state law, a practice called “looping.” State regulators have also suspended 26 of the company’s cultivation, processing, and retail licenses. A hearing is expected within 30 days. None of the chain’s co-owners were among those arrested, Mitchell reports, noting that “most of the employees taken into custody were budtenders or lower-level employees.” —Eds.

Potential charges relate to marijuana sales exceeding limits set in state law, police said. Colorado allows people 21 and older to possess an ounce or less of marijuana under a measure approved by voters in 2012.

The city department that regulates marijuana businesses issued the order to close the businesses based on the police investigation, spokesman Dan Rowland said. It marked the first time the city has issued an open-ended suspension to any legal marijuana business since sales began in 2014, he said.

Colorado has made a concerted effort to avoid a federal crackdown on its marijuana experiment, including police and government enforcement against illegal marijuana grows or sales.

Denver police didn’t name any federal agencies as partners in the investigation.

Gov. John Hickenlooper highlighted those efforts in an August letter to U.S. Attorney General Jeff Sessions, who requested information on marijuana legalization. Sessions has been a longtime opponent of state legalization and has suggested the federal government should crack down.

Special Agent Randy Ladd, a spokesman for the Denver division of the U.S. Drug Enforcement Administration, said the agency wasn’t involved. Denver police didn’t name any federal agencies as partners in the investigation.

The city’s order shuttered 26 retail stores and other marijuana growing facilities operating under the name Sweet Leaf. But the police investigation focused on eight locations licensed by the company, and officers searched those addresses Thursday.

Police spokesman Sonny Jackson said he couldn’t provide more detail on the case because of the ongoing investigation. The department didn’t name the people arrested.

Rowland said the businesses can’t sell or produce any cannabis products while the order is in place. The city plans to hold a public hearing within 30 days.

“This is a way for us to put a hold on things so we can figure out what’s going on,” he said.

Under Colorado law, marijuana businesses must get separate licenses for various purposes, even if they operate out of the same building. For example, a retail store licensed to sell recreational pot also needs a medical marijuana retail license to sell products designated for medical use.

“One thing I always say about legalization is it didn’t end law enforcement,” said Sam Kamin, a University of Denver marijuana policy law professor. “If you’re going to have a system that works, people not complying with regulations need to be shut down.”

In Washington state, which also legalized recreational marijuana in 2012, no legal, regulated pot businesses have faced police raids. Some have, however, had their licenses suspended or revoked for failing to follow industry rules.

Sweet Leaf’s website lists one store in Oregon and 10 stores in Colorado. An employee who answered the phone at the Oregon store Thursday said they were open.

Oregon regulators weren’t immediately available to discuss the company’s status in that state.

One of the best decisions you can make after your car is dented and creased in Lakewood Colorado is to choose to repair with the best paintless dent repair Lakewood shop. Not only do you get high quality and appearance but also stand to save some money in the process. The shorter period it takes to restore your car to perfection means you can make better use of your time for the rest of the day.

In contrast, traditional dent repair techniques can take up to three days to repair the same damage that your best paintless dent repair shop can do within just an hour.

This new technique involves patiently massaging the dents on the body of your car from the interior until they are no more. The final result is so fine that it is hard to even for you to show where your car was originally dented.

Will my car paint be damaged?

Your best PDR experts in Lakewood have highly specialized tools to smooth out the dent without damaging the paint or car body. The whole process is manned by well-trained specialists, and the odds of anything going wrong are small.

Additionally, the paints that most car manufacturers use nowadays are super flexible and will easily resume the original position without any damage to their structure and durability. Needless to say, PDR is the only way to restore your car to its original shape while retaining the factory paint.

How durable are PDR results

Most customers in the market for the best paintless dent repair service in Lakewood wonder whether the dents might come back after a while. In truth, there is no way the dent can reappear after it has been correctly repaired by the best-gifted hands Lakewood has to offer. The results are as durable as other manufacturer molded parts of your car and you have nothing to worry about.

What types of dents can be repaired

Sadly, not all dents on your car can be repaired by this technique. Some dents located on heavily braced hoods and on the edges of panels might prove difficult to reshape with any desirable outcomes.

Don’t worry though, almost 95% of all minor car dents can be repaired using this technique. The only way to actually tell if it can be done is to have an expert look at it. Even some really small dents can be very difficult to mend if they are either too deep or twisted.

Your technician will be able to explain to you how your car will be restored before the can start the actual repair work.

Get the best value for your car with paintless dent repair

If you are looking to sell your car to interested investors quickly and for the best price, you need to choose paintless dent repair that way you keep the original factory paint. The visual appeal of your car is restored to its best, and you are guaranteed to sell it for more than its worth.

Not only are the residents of Denver pretty cool, there are some really interesting businesses that are in Denver as well.  The locals have brought some creativity to the local restaurant, retail and service industries.  The laid back attitude is definitely reflected in the business community and no we’re not even talking about the new marijuana industry either.  So let’s have a look at the 5 coolest businesses in Denver.

Not only has this extraordinary hotel been a downtown landmark since 1892, it has an incredibly beautiful lobby with cathedral ceilings and detailed architecture.  How cool is it to have bee hives on the roof.  The hives produce honey that is used in the kitchens to create some tasty baked goods you can indulge in while having afternoon tea.

This is the place to score some premium infused specialty olive oils and vinegars.  It would even make Rachel Ray drool just a little bit.  They import olive oil from all over the world but some of the other items like jams, chutney and vinegars are created locally.

This is one wicked silkscreen shop!  Inkydink creates original posters, glassware, clothing and whatnot for the local businesses in and around Colorado.  They have a variety of cool designs and images that are available as custom embroidery.  There prints aren’t just dogs playing poker they appeal to the creatives, hipsters, skaters and nerds alike.

Only in Denver could you get away with putting one of the coolest restaurants in town in a former mortuary.  Yes, the Olinger Mortuary is now a small plate style restaurant that could tease any palette.  The chef/owner Justin Cucci brilliantly created a menu of “global street food” that is meant to connect people through delicious food and different cultures.  You can sample street food from various continents and you have to try the Mongolian BBQ Duck bun or his sweet and tangy shishito peppers with cheddar curds and orange habanero jam.  Are you drooling yet…you should be.

This ice cream parlor serves cones from a 28 foot tall cream can, that was inspired by the hot dog shaped stands that you used to find on Coney Island back in the 70’s.  Buying an ice cream cone here is so much more than just a sugary treat, the owner matches every scoop by donating rice or beans to a local community charity.  To date they have donated more than $100,000.  Denver isn’t only laid back and creative it is also a city built on kindness.

There are new businesses launched in Colorado every single day and Denver and Boulder have become internationally recognized tech hubs with explosive growth. Other cities and towns throughout the state are holding their own too.